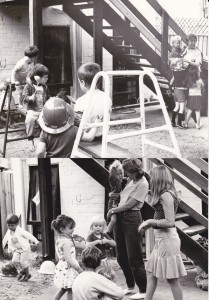 ICC began operation as a child care service in May 1982. Since late 1978 a group of parents (all ABC workers) had been lobbying for the provision of care in the heart of the inner city to meet the special needs of the community in the area. In a four year period they organised funding, community support and patronage and a general framework for a stable and viable service in an area famous for its nomadic population. The original premises were donated by the ABC staff association in Bourke Street, Darlinghurst. The building continued to be leased to ICC for nominal rent until the move to Ultimo in 1991. The service originally operated 24 hours per day, opening 6am Monday morning and closing 6am the following Saturday  morning.

The centre was licensed for 25 children during the day and a further 10 children for night care. The overnight service was immensely popular. In some cases it was genuinely the last possibility for shift workers as ICC was recieving many calls for refuge and intervention care. Regrettably, in 1986 the overnight care service was not being used to a level to make it economically viable and so the hours were reduced to a closing time at midnight.

In 1987 a campaign was begun to gain funds to enable ICC to relocate from Darlinghurst to larger premises. It was believed, quite rightly, that this would enable the service to expand thereby meeting the demand and also improve finacial viability by enjoying some economies of scale. The premises in Bourke St had also become increasingly unworkable for the provision of care (due to heavy maintenance requirements, and restrictive licensing demands of a 1:5 child ratio at all times for all age groups).

In January 1988 approval was granted and funding of $562,000.00 guaranteed by the Federal Government of Health, Housing and Community Services. Inner City Care went shopping for premisis. Sites were found and joint venues were considered with OTC, the Darling Harbour Authority and the State Library among others. Common to all there was a commitment to providing childcare in the CBD or fringes of the same area.

In November 1989 the Australian Broadcasting Corporation (ABC) issued requests for tenders for the provision of childcare in the corporations’ new premesis in Ultimo. In 1990 ICC won that tender. Although ICC had a relationship with a number of working parents in its time we had never before had any formal relations with the Corporation. However, we won the tender by demonstrating a successful ongoing commitment to high quality childcare and effective management of all aspects of childcare operation. So now the ABC’s only formal relationship with ICC is as landlord as set out in the lease documents and memoranda of understanding which stipulate conditions for review of tenancy. 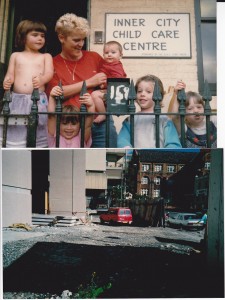 On 15th July 1991 ICC opened at the ABC building in Ultimo as a 39 place (10 places at night) child care centre, operating Monday to Friday; 7am to midnight. In this new location there was a high demand for day care (particularly 0-3 year olds) and a moderate demand for night care.

Usage of the night service slowly declined, the Management Committee at the time carried out a marketing and promotions strategy but this had very little effect. With the high cost of childcare and the impending loss of the Federal Government Operational Subsidy ($54,000.00) in July 1997, the Committe made the difficult decision to close the night time service. It’s operation officially ceased at the end of June 1997.

It is currently a very different situation with the numbers of children increased to 44 per day and more full-time staff have been employed over many years. The demand has increased dramatically over recent years and ICC has mostly been fully occupied with great educator to child ratios. The demand for care tends to be higher on Tuesday to Thursday, with Monday and Friday’s becoming increasingly more difficult to fill. We continue to have a lengthy Waiting List which is updated reguarly to provide places to families that need them.